By the end of 2017, 1113 small and micro producers of electricity had joined Elektrilevi’s network, the number has increased by approximately 35% compared to the previous year. The amount of energy of 194 000 MWh sent to the network by these producers last year was more than 4 times bigger than three years ago, which shows evidence of the rising trend of decentralized energetics. Today, every tenth place of consumption on Elektrilevi’s network receives electricity from small producers. 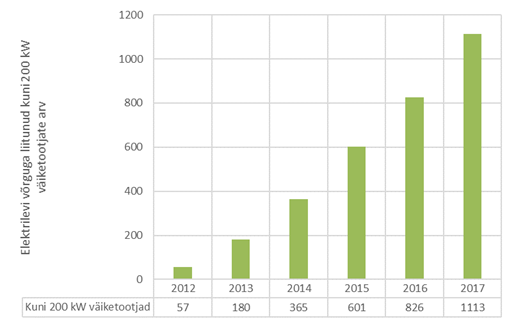 Last year, Elektrilevi simplified the joining procedure of small and micro producers up to 200 kW, as a result of which the amount of required documents decreased and the list of allowed inverters i.e. devices necessary for changing the voltage expanded. “The spreading of decentralized production is a fast-growing trend and we wish to keep up with the developments. We believe that among other reasons, the simplified procedure has helped increase the number of signups,” Elektrilevi’s signup product manager Kaija Vill commented on the influence of the changes. In 2017, 287 new small producers of energy joined Elektrilevi’s network, in 2016 that number was 225.

According to Vill, the role of the electricity network is changing in relation to new trends: its main function is not just delivering electrical energy anymore, but also offering assurance and safety in case the wind doesn’t blow and the sun doesn’t shine. “Two-way traffic of energy means the necessity of reconstructing the network, new investments and more complex challenges for managing the voltage quality. The network analysis made for their joining will become the more complex, the more decentralized producers are added to the network – therefore we are searching for a compromise to make the process as smooth as possible for joiners on one hand, and make sure that the quality of electricity for consumers does not degrade on the other hand,” added Vill.

The number of micro producers i.e. producers with nominal power up to 15 kW that have joined Elektrilevi’s network has increased from 20 to 954 during the years of 2012-2017. The number of small producers, i.e. plants with the power of 16-200 kW has increased from 39 to 159 in five years. 69 power plants with the power of more than 200 kW have joined the largest distribution network in Estonia.

Elektrilevi is the largest network company in Estonia, which manages approximately 61 000 kilometres of power lines and 24 000 substations. In addition, the company manages 40 % of street lighting spots in Estonia and is piloting establishing a communications network open for fast internet connection to electrical infrastructure.